I finally uploaded some pictures I've taken with my cell-phone-camera over the last few weeks. Behold! Scenes from Jerusalem: 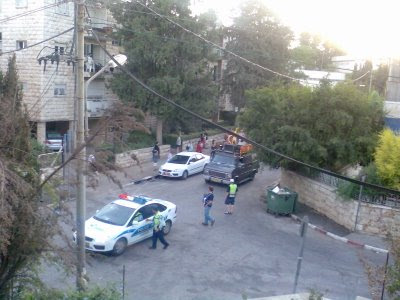 A few weeks ago, Liza and I heard a ruckus from the street below, the sounds of Jewish music being played incredibly loudly, people singing, and people talking.

Oh! I exclaimed. Maybe it's a hachnasat Torah, a ceremony in which a synagogue has procured a new Torah scroll, and accompanies it in a sort of parade through the streets and into its new home in the sanctuary.

I'd once seen a "Torah Truck" in my neighborhood designated for this purpose, with the loud music and incredibly tacky lights. Could it be . . . ?

Yes! Here they come, and here they go, right under our porch window . . . 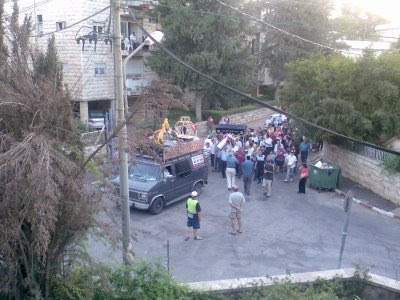 Next, here we have a blurry photo of some cupcakes my roommate made: 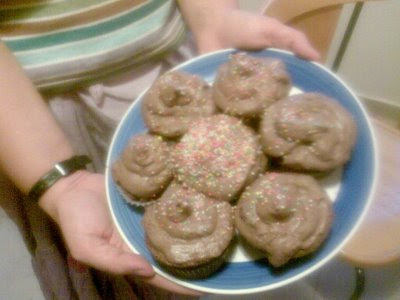 I realize that in the photo they look like poo, but in reality they were delicious cupcakes with an amazing, chocolate-mousse-flavored buttercream frosting! She'd been experimenting with various recipes for buttercream over the course of about two weeks, which meant I ate a lot of homemade cupcakes . . . yes, having a roommate has definite advantages. This particular buttercream, her fourth attempt, was my favorite, though she prefers the fifth incarnation.

Now we go on to Sukkot pictures. In the weeks leading up to the holiday of Sukkot, a business that sells sukkah set up -- of course -- a sukkah on Emek Refaim Street, where they took orders. And next to it was the most adorable little sukkah playhouse for children, complete with plastic schach, and the same mesh windows and embedded decorations as the adult models: 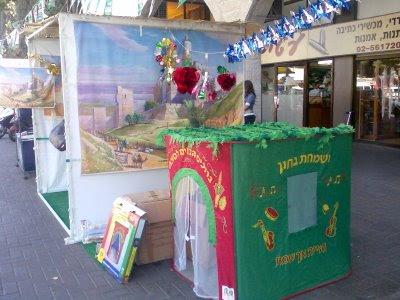 Isn't that so cute?

Up the street is my favorite video store, Ozen Hashlishi ("The Third Ear"). The employees there are young, art-student types. It's a funky place. One of the employees went to the trouble of creating a model of a sukkah, about a foot high and maybe a foot-and-a-half long, out of cut-up movie posters, abandoned computer parts, plastina and empty vodka bottles. It was sitting on a table of movie-related books, next to the checkout line.

Here is the exterior: 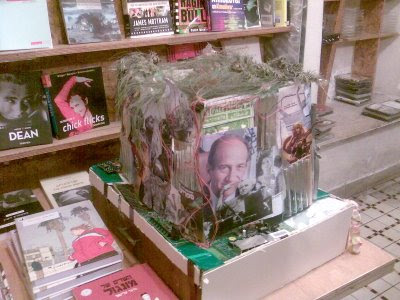 Here, a view of the interior. The detailed decorations -- such as the teeny, tiny paper chain -- were amazing: 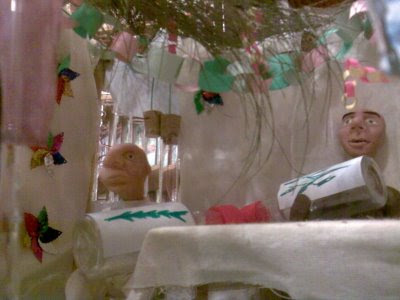 And an aerial view (clearly, this is not a kosher succah, since enough schach was left out to allow people to get a bird's-eye view inside): 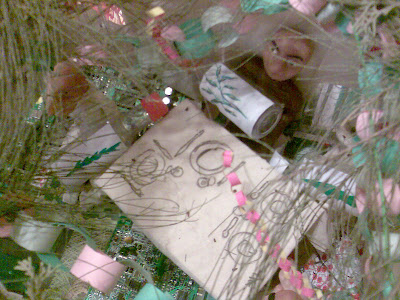 Finally, a photo I took just this afternoon, of a perfect arc-shaped rainbow that appeared fleetingly over Emek Refaim Street: 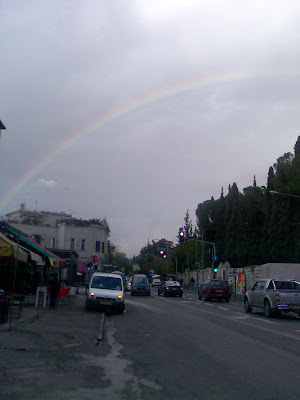