When I bought my ticket for the Bolshoi, I chose the performance on the basis that it was the only night during my trip that they were doing a ballet (rather than opera) and it wasn't Shabbat. It didn't much matter what ballet they were doing, since there was no other night I could see any dance there. I could tell it would be something modern, but didn't really pay much attention to what it would be. Whatever it would be, it would be the Bolshoi Ballet! Amazing!

When I got there and settled in my balcony seat, an incredibly graceful and strong man dressed in a suit was dancing on and around a sofa, full of angst. 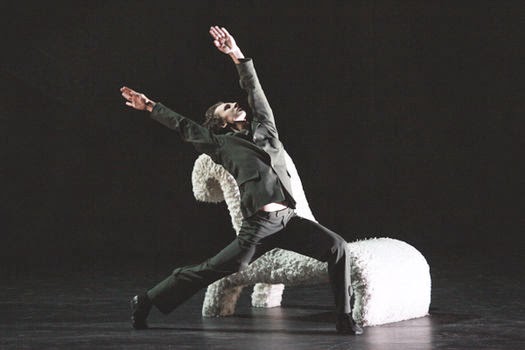 He was extremely talented. When he was finished, about four other dancers came on, did a dance full of angst, and left, to be replaced by a couple playing out domestic angst in a home (it ended with the woman
taking a baby out of the smoking oven, handing it to the guy, and leaving).

Here are photos from the ballet, taken by Damir Yusupov, who I think is an official photographer for the Bolshoi (I found the pictures through Google Images): 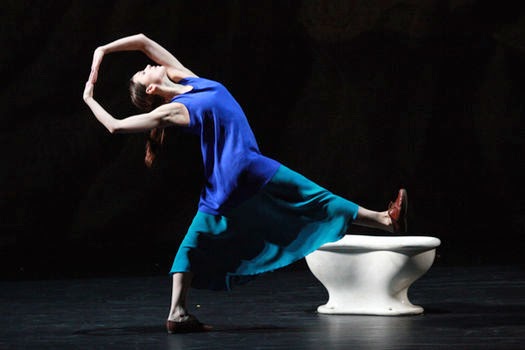 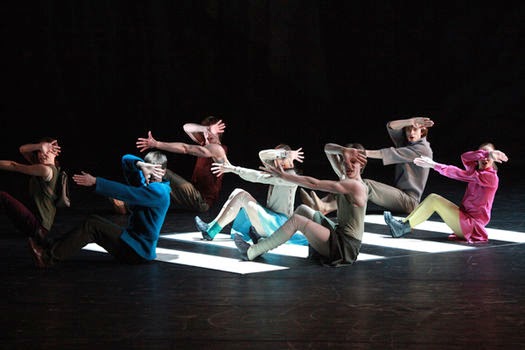 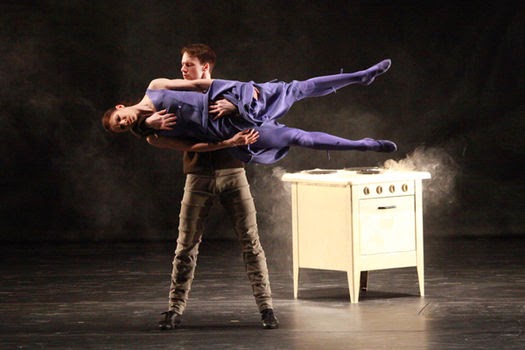 Although ideally I would have been treated to classical ballet, full of frilly tutus and soaring music, I could appreciate the modern dance. I cannot overstate how talented the dancers were, and if the music and choreography weren't my taste, and if I'd have preferred or the Nutcracker, well, I could still respect what the Bolshoi had chosen to do tonight. Besides, what is a trip to without a ballet full of angst? I felt the whole thing was appropriate and interesting and Russian, through my aching feet, slowly-receding nausea, and slowly decreasing fever.


When intermission began, I went downstairs and claimed my rightful seat. Tenth row, center aisle at last! Thank God. I also asked an usher for an English program. (None of the ushers spoke a word of English, natch.) It turned out that what I had just seen was called Kvartira, and it had been a one-act ballet. After intermission, I'd be seeing a different 45-minute one-act ballet, Igor Stravinsky's The Rite of Spring.

Some of you reading this know what's coming, but I did not. I did not know that when The Rite of Spring debuted in 1913, it literally almost caused a riot, because the music is so discordant and the choreography was so disturbing. Oh no, my immediate thought was "The Rite of Spring – that sounds pretty!" (Looking back, my ignorance is embarrassing but it sure makes for a better story on my blog.)

This performance had new choreography; the show had debuted at the Bolshoi just nine performances ago. The "plot" of the dance revolves around a group of dancers, equally divided between men and women, who live in an incredibly ugly futuristic dystopia; the set immediately brought to mind the film "9." 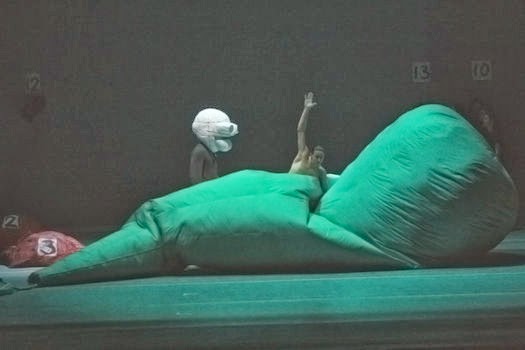 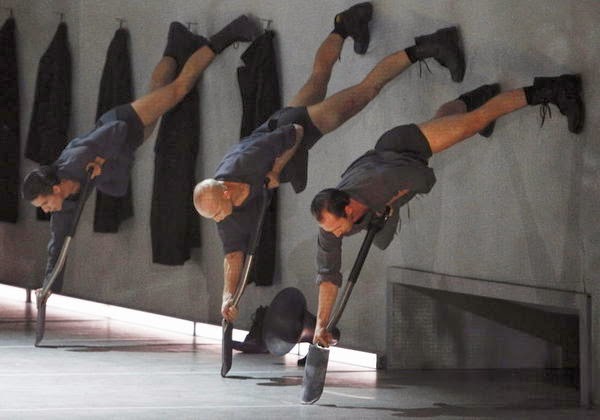 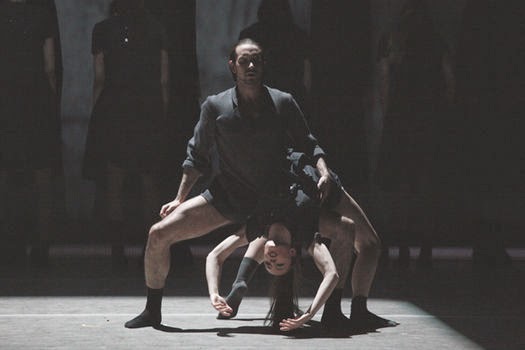 The dancers have no water. There is a huge faucet way up in the sky, and the women often stand under it, praying for relief, but it never provides even a drop. Meanwhile, the men force the women to conform the rules of this strange world – for example, each dancer creates a platform based on her height, so that in no time they all become the same height. A creepy drawing of a leader (Lenin?) appears, and the women rip it apart in a display of protest! 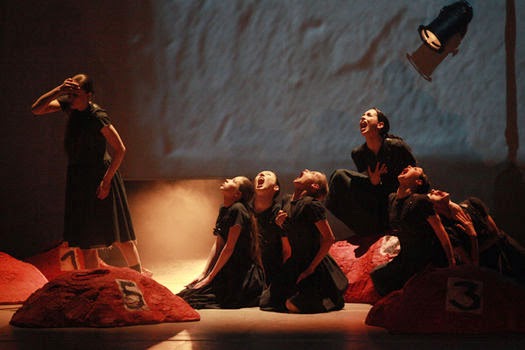 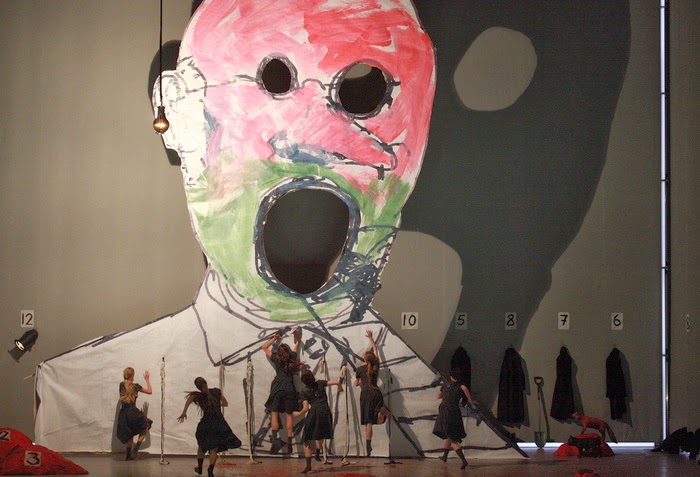 And then, in a scene that should have come with a trigger warning, each of the men rapes one of the women. Then the women hang themselves. Then a creepy medical table is lowered down from the sky, and each woman rolls off of it into a long sandbox, and rolls around in the dust, trailing her hair in it and then whipping her hair back, so the dust is everywhere. The world is dust! The world is full of nothing, it has no meaning at all! Then they all get water and are happy. The end. 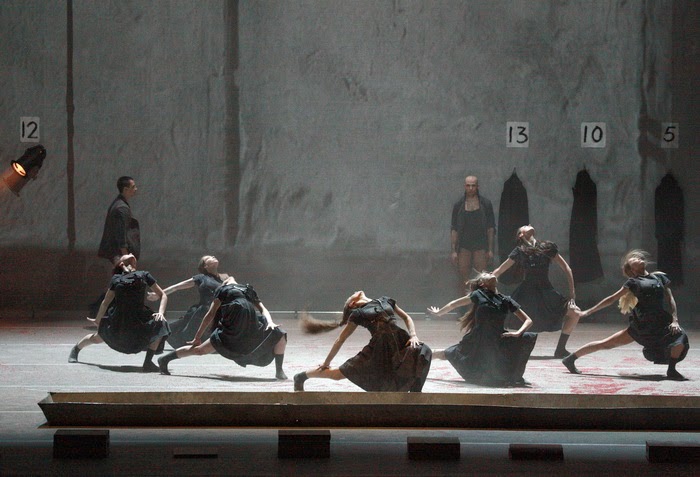 That's right, children. After everything I'd been through to get to the ballet, it turned out to be a super-depressing commentary on the Soviet regime and on patriarchy, with scenes of rape and mass hanging. I'm pretty sure my interpretation is correct because on the way out, I found the group of tourists who had arrived late with me, and we'd all interpreted it the same way. Turns out they were Americans who had just been in for the Olympics, and stopped to see before going home.


I learned two things on the way out. First, the beautiful lobby area is full of benches because – and this makes complete sense – putting one's coat back on after the ballet is part of the procedure of leaving, when you live in a place as cold as Moscow. The Bolshoi architects were kind enough to provide ample coat-check space and ample space for putting on boots, hats, and scarves.

Second, they are way behind on the consumerism thing in . The American group were interested in buying Bolshoi souvenirs – they specifically wanted t-shirts, but would have been happy with anything that cost $50 or less – but the only items available were a few different books (only one in English, and all pricey) you could buy on the way out from a woman at a little table. In or , the entire area between the theater and the Metro station would have been riddled with little souvenir shops with licenses to sell Bolshoi items. Here? Nothing. (Another difference: There were people dressed in formal eveningwear at the Bolshoi. In and theaters, people dress nicely, but you don't see anyone in a floor-length gown.)

Anyway, I hobbled back to the Metro and got off at the station nearest to my hotel. I had a bit of confusion about how exactly to get back, and ended up taking a wrong turn for a short while a couple of times (see my path, in the red line, below), which would not have been a big deal except that my feet felt like they were burning in lava, and I was tired and sick and was just barely managing to see the amusing irony in the fact that after all this, the ballet had been one of the most depressing productions I'd ever seen. I was also not happy to be walking alone around Moscow late at night, because there weren't enough people on the street for my taste. It felt a bit alarming. 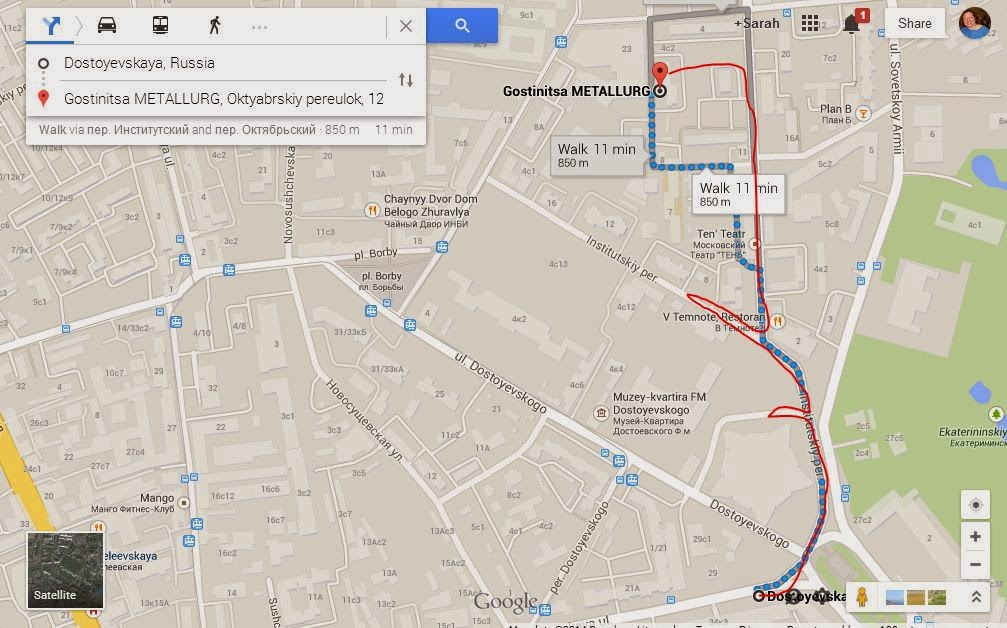 When I got back to my room, I fell into a deep sleep, without setting my alarm. I needed money and I needed to get this trip back on track, but most of all I needed to get healthy again.
Posted by Sarah at 1:26 AM