1- This is what the engine of my refrigerator looked like: 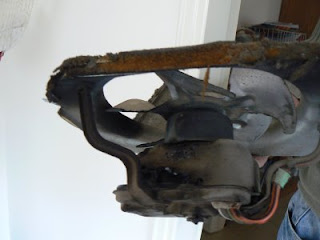 It was basically melted. We got a new one today. This means we were sans fridge for 3 days. Thank God this happened in the winter, rather than in the summer.

FYI the fridge belongs to the landlord, so the money I put out to replace the engine is being deducted from next month's rent.

Cover with water, cook for a while, and enjoy.
(It actually was really yummy.)

3- My landlord is infuriating. I don't want to get into the details here, but let's just say that the refrigerator drama is not the only "issue" I've had to discuss with him recently, and it's so frustrating dealing with him. The conclusion that Liza and I have reached is that the man does not understand that although he owns this place and therefore has the right to expect rent money and for us not to damage anything, this isn't his home anymore, it's ours. (He lived here for 30 years.) It doesn't seem to register with him that certain things are none of his business, or that, no, we don't have to put the furniture where he thinks it would be best. AAAAARGH.

4- I tried to give blood today, for the war effort. I was at Shaarei Tzedek Hospital anyhow for an appointment with the good folk at the sleep lab, and asked at "information" where to give blood. The 8-thousand year old woman at the counter said "I don't think we do that." Can it really be that you can't give blood at a hospital? Maybe I have to go to a Magen David Adom center? Anyhow I now feel like those ads that say "Don't Almost Give. Give." are directed right at me.

5- In case you are one of the 3 people in Israel who hasn't gotten the email about this, you can donate toys, children's books, blankets, and small heaters to Israelis in the South by wrapping them in a box and bringing them to your local Israeli post office. The Israel Postal Authority has made arrangements with the municipalities of several communities (Ashkelon, Be'er Sheva, Sderot, Ofakim and Netivot) to distribute the goodies, after determining that those items are what they most want. The donated items will be sent for free. More details here.

6- I agree 100% with the first 20 (short) paragraphs of this post. Regarding the rest (last 7 paragraphs), I have a slightly (though not substantially) different take; more about that some other time, perhaps.
Posted by Sarah at 10:30 PM