The Many Faces of Artemis
(Warning: This post is probably interesting only to those who like cats) 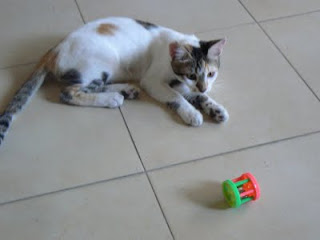 Artemis: Kitty's official name, and how we usually refer to her. She is now 3 1/2 months old. She's gotten all her vaccines and is now allowed to roam outside our front door, though as yet we don't think she's actually gone outside. She has her first collar, but it's set at the tiniest circumference. Soon she will graduate from "baby cat" food to "kitten" food. She is quite fond of sleeping on my bed. Also having her tummy rubbed. Also suddenly running from one room to another as if something extremely urgent is happening; we have no idea what. Also hiding in cabinets. 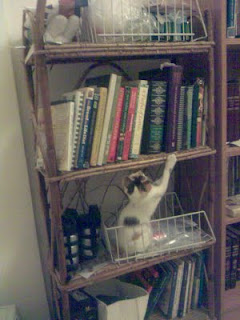 (Here's she's trying to catch the little piece of paper sticking out of the top of my copy of Spice and Spirit.)

Bitemis: What she is called when she decides that chewing on a human hand, wrist, toe or ankle is a good idea. We push her away but apparently this is normal kitten behavior. Vet says she'll grow out of it. Lord I hope so. It hurts!

Squeeky: What we call her when she squeeks. She's obviously trying to tell us something but it just comes out as a high-pitched "eh, eh, eh." However she has another sound, a sort of rolling in the back of her throat (not purring, more of a gutteral squawk) which means she's verrrry happy. She makes this sound sometimes when we pick her up and pet her. Someone: As in "someone dragged a roll of paper towels onto the porch and tore it apart" and "someone pushed my earrings off my desk onto the floor" and "someone found my winter hat and has deposited it under the couch." 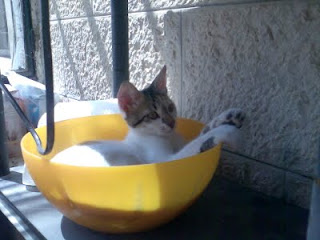 Kitty: As in "here, Kitty Kitty," which we say when we want her to come to us. We've trained her to do it and so far it works 100% of the time, which is great when we can't find her.

Little Girl, Baby: Term of endearment used by both Liza and me. 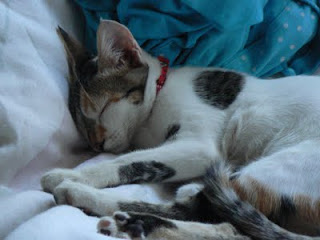 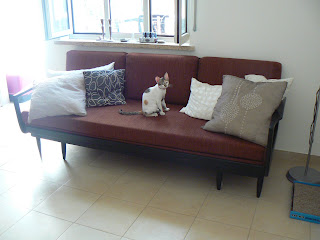 Adulthood, at last.
Posted by Sarah at 5:26 PM No comments: