It shows a series of women describing themselves to a sketch artist, who draws their portraits based on their self-descriptions. Then, each woman is described to the artist by someone else -- and the resulting sketch is always more attractive. In every case, the way a stranger described the subject was more attractive than the way the subject described herself.

I thought of this video when I went to see a temporary exhibit at the Israel Museum called "Making an Entrance: Jewish Artists in 19th-Century Europe." The exhibit looks at how Jews in the 1800's, who were just being allowed into art academies or otherwise gaining formal training in painting, dealt with their Jewishness in their work. Some hid it, so they could blend more successfully into Europe's higher society. Some (well, one, anyway, in this exhibit) painted scenes of Jewish families celebrating Jewish holidays. And another initially painted neutral subjects, and later in life started painting nostalgic portraits of other (identifiably-Jewish) Jews.

To get to the exhibit, one must walk through the Israel Museum's permanent, and rather random, display of Dutch art, which touches me not at all - I enjoy neither the style of painting, nor the subject matter, though I respect them both. But one room away are paintings of Jews, and even if they are wearing European clothes and hairstyles of the time, they still look exactly, and touchingly, like the people I see in synagogue all the time. You can even tell which little kid is most likely to charm her way into an extra lollipop from the candy man, and which woman would, if she were alive today, agitate for feminist reforms in her Orthodox synagogue. These are MY people.

Anyway, in 1836, Moritz Daniel Oppenheim painted wedding portraits of then-17-year-old Charlotte von Rothschild and her new husband, her first cousin, Lionel de Rothschild. This is the portrait he painted of Charlotte: 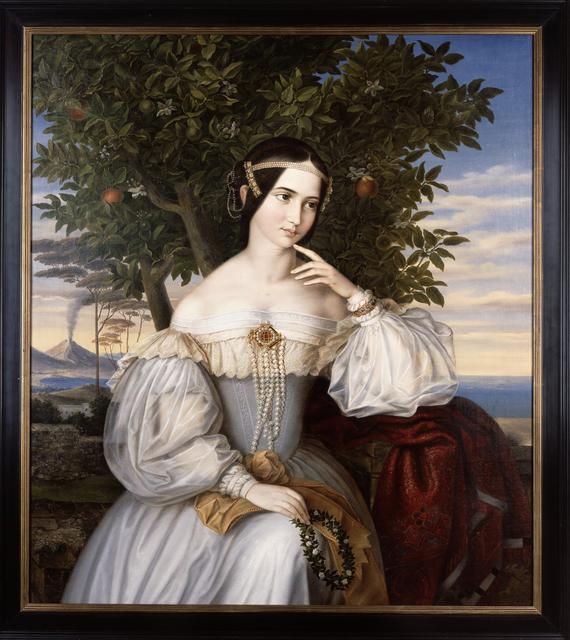 The painting shows a young, sweet-looking, attractive, vital young woman wearing the latest styles in finery. I'm sure that Oppenheim was paid in part to make her look as beautiful as possible, minimizing any flaws, but still - she must have looked SOMETHING like this.

Young Charlotte was immensely interested in art and became an accomplished painter in her own right. Just two years after her marriage, she produced the following self-portrait, a sketch she made to prepare for her "Self-Portrait with My Family":

Here we have a relatively frumpy woman, who could be in her 30's, with unruly curls, bags under her eyes -- which are looking in different directions --  and comparatively dowdy clothing. Remember, she produced this just two years after Oppenheim painted the work above.

And that's why I thought about the Dove commercial, there in temporary exhibit space at the Israel Museum.
Posted by Sarah at 11:56 AM No comments: