Pictures of the Week

Sometimes when I'm feeling low, I stop by the pet store on Emek Refaim Street to . . .
Pat the Bunnies! 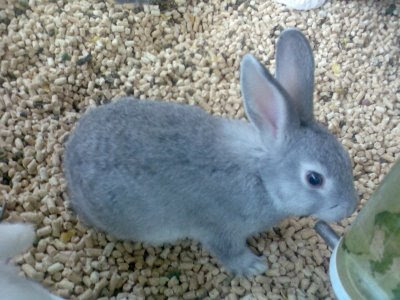 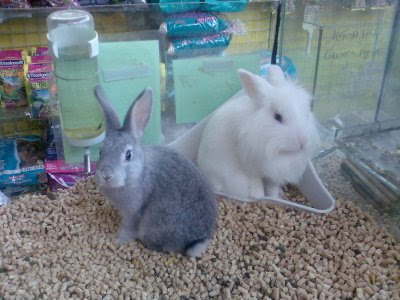 I think it's hysterical when they sit in their food bowl. Stupid animals! (But cute)

The pet store recently got a large shipment of guinea pigs. You all know how I feel about guinea pigs. I know that some people think they look like rats, but now everytime I see one, I think of comment about "let loose the guinea pigs of war." :-) 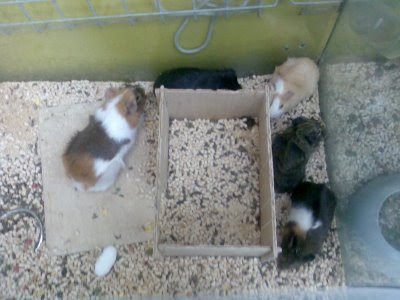 However. You see that calico guinea pig on the left? And how the others are cowering along the edges of their cage? That's because the calico guy was TERRORIZING the other guinea pigs. Just when they'd all find a nice place to relax and chew on a snack, he'd go RUNNING all over them, scattering them to the ends of the ... cage... and then wait for them to relax again before having another nervous fit and chasing them again.

I have to admit that, being somewhat evil, I admired his personality.

Now here is a picture I took from the escalator inside the Jerusalem Central Bus Station, of the crowd outside pushing and squeezing to get through the ONE functioning metal detector, with Shabbat just two hours away: 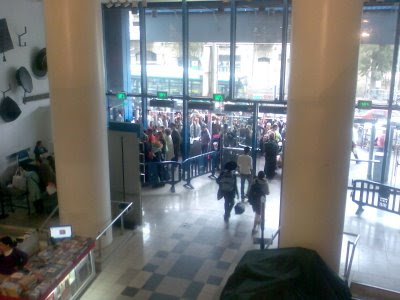 It's hard to see, but the throng of people extends down the street, past the back of the bus at the top of the photo.

The irony is that the security system is meant to prevent anyone from blowing up the bus station, or spraying passengers with bullets . . . but any terrorist with a brain can easily figure out that one could kill 100 Jews at a time by detonating himself, or opening fire, inside the crowd of people waiting to get through the security.

That's all for this time. Have a good week.

PS If anyone gets information about the time and place of the funeral for Rabbi and Mrs. Holtzberg, please share it here. I want to attend.
Posted by Sarah at 12:37 PM