. . . which have gone through my mind lately.

If, according to the Arab bloggers quoted here, Biden is a confirmed Zionist, and now Obama has appointed Rahm Emanuel to be his Chief of Staff, am I still supposed to believe that Obama will unquestionably be bad for Israel?

May I posit that the "bad for Israel" argument is really about whether Israel is a) best off left to do whatever it wants, without interference from Americans who don't really understand what is going on, vs. b) encouraging Israel to move in a different direction because Israel does not always look out for its own best interests, and can't see the forest for the trees? Does anyone really know what is "best for Israel"? Do any Israelis know what is "best for Israel"?

When dealing with a man who is Italian or French, how is it possible to tell if he is a) flirting with you, b) gay, c) simply being Italian/French? Inquiring female American-Israeli minds want to know.

Why does IDC-Herzeliya -- which is quite a good school-- think that this advertisement, suggesting that oily Middle-Eastern car salesmen-in-training are representing them, will get people to apply?

Am I the only one who noticed the references to The Merchant of Venice and to Judas in the comments to this article? How disturbing is that? Anti-semites are creepy, no matter what party they belong to.

What should I do on the blog to acknowledge that this week is parshat Chayyei Sarah? Does the question itself fulfill the requirement?

A question posed by a friend:

In Parshat Lech Lecha, God commands that descendents of Abraham should be circumcised. The Sefer Hachinuch, quoting the Rambam, says that one of the reasons for this commandment is that God "wished to affix . . . a permanent sign in their bodies to differentiate them from the other nations . . . just as they are differentiated in their spiritual form . . . this physical differentiation was set in the [male organ] as it is the causal source of the existence of the human species . . . "

I expected my friend to question the need for mutilating a baby, but no. This was her question, and it's a good one:

Given that the commandment of circumcision is a very basic one -- the second in the Torah -- and that it is assumed to be for the purpose of differentiating the Jews, perfecting the body, etc, why did God -- for it is God, not the rabbis, who spell this out -- choose for the mitzva to be performed on a body part that only men have? Why not command that, say, one must cut the pinky finger such that there will be a scar? Or that one must remove an earlobe or something?

Why set down such a fundamental mitzvah -- one that differentiates "the people" and symbolizes our very covenant with God -- in a way that only half the people can participate?

I'm certainly not advocating the practice which has come to be known as "female circumcision" (which is NOT circumcision). Just saying: if the mitzvah involves removing a piece of the body that is pretty much superfluous, why not pick another body part so that the women, too, are marked as different from those of other nations?

Why can't dishes magically wash themselves? and floors? and bathrooms?

Have any of you tried this game? Is it good? Is it worth the money to register for it?

My sister and her family got a dog! It is a cockapoo puppy, which apparently has some other breed mixed in because, according to the vet, she is too small for a pure cockapoo. She is about 9 weeks old now and weights 1.5 pounds. Her name is Mishmish (which means "Apricot" in Hebrew). She likes to chase my 2-year-old nephew around the couch (he loves it). Unfortunately I won't get to meet Mishmish until I visit them in America (probably next summer). 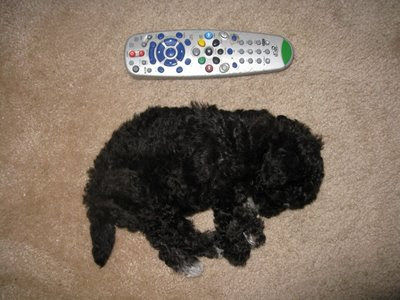 Mishmish napping after a busy day. 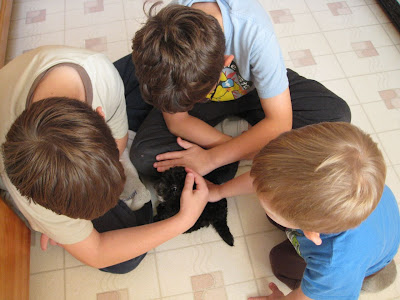 Mishmish soaking up the love from the 3 smallest humans in the house.