Liz is one of my new favorite people.

She is a friend of my roommate, and now she is my friend too (I hope!)

Liz is an American. She is not Jewish. Her studies in linguistics in college led to an interest in Semitic languages, and she became impressively fluent in both Hebrew and Arabic. Then she decided to get an M.A. in Middle Eastern Studies, and got into Hebrew University, which is how she ended up in our neck of the woods.

To help with necessities like, oh, a place to live, Liz also became a part-time "professional volunteer" for a non-profit organization that runs a playground and rock-climbing facility for Palestinian children in the tiny, mostly Christian, Bethlehem suburb of Beit Sahour (otherwise known as "the middle of nowhere"). The job came with a cheap place to live and something interesting to put on her resume.

As a secular American living in PA-controlled territory and studying and hanging out in Israeli Jerusalem, speaking both Hebrew and Arabic, Liz has a unique -- and frankly, hysterically funny-- perspective on Arabs, Jews, and Arab-Israeli relations. I keep telling her she's got to start a blog, but she's too shy.

This is Liz, sitting in our kitchen: 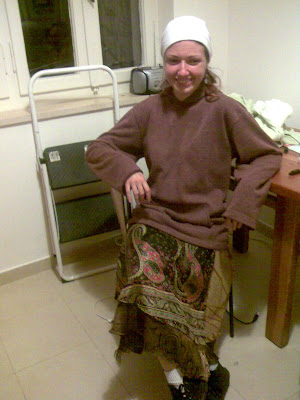 Yes, she is well aware that she dresses like a mitnachelet (an Israeli settler). She has been told as much by many, many people. The scarf she has wrapped around her head in this photo, to protect herself against the sun at the Israeli folk festival she attended, completes the look. She doesn't mind being told she looks like a religious Jewish settler. She just says "Well, these are my clothes" and moves on with her day.

Liz sometimes sleeps over at our apartment, because traveling between Western Jerusalem and Beit Sahour is quite a trek. What with all the time she has spent at check-points, Liz now knows lots of useful Arabic phrases, which she has picked up from Israeli soldiers. Our favorite is "take your sheep and go home."

Anyhow, Liz sleeps over and uses the opportunity to read my Kitzur Shulchan Aruch on the laws of kashrut, which confuse her and which she wants to understand better. And then she regales us with tales of life on the other side.

Liz's visa ran out, and her volunteer job came to an end, and she's finished with her classes, so it looked like she'd have to go back to America for good. She spent a long time looking for a job which would allow her to get another visa (which she did, eventually). I asked her why, if she was pretty much done with her Master's, it was so important to her to come back.

She said "I didn't realize, when I signed up to come here, how much the people would come to mean to me. It didn't occur to me that I would love it here, and that I would feel so connected to this place and to the people."

What I love about Liz is that she meant this, completely and sincerely, both about her Christian and Muslim friends in Beit Sahour and about her Jewish friends in Jerusalem.

Liz is smart, entertaining, laid-back, and has a unique perspective, and I'm so happy she is coming back!

Can we please convince her to keep a blog?
Posted by Sarah at 1:17 PM