You Heard It Here First

This is definitely about to be the most inappropriate thing I've ever blogged about. Those of you who are very very frum, or who wish to maintain your image of me as being the picture-perfect Nice Orthodox Girl, please, look away now. I thought about waiving the opportunity to post about this, but . . . hey, it gives me a little thrill, to subvert people's images of me. And besides, if this doesn't earn me a link by Esther Kustanowitz, I'll eat my hat.

About 5 years ago, I attended an event at my alma mater, Barnard College, about women in the print media industry, or, more specifically, how to become a member of the print media industry. There was a panel of three Barnard alumnae, each at a different stage of her career, each representing a different sort of media and different experiences getting to where they were. They spoke in turn about what they'd accomplished and how, and then during the Q&A the 150 or so Barnard students and graduates in the audience asked for insights and advice.

I was struck by one of the panel members, an alumna by the name of Ronnie Koenig. I'd never met her before, though apparently she graduated from the school around the same time I did. She was smart and polished and funny, confident yet self-effacing, and she was on the panel because she was the editor of . . . Playgirl.

I suspected that with a name like Ronnie Koenig, and her brown hair and petite frame, and her self-effacing humor, that she might be Jewish. I was the New York correspondent for the Jewish Chronicle of London, and was looking for interesting New York Jews to profile. So a few days later I called Ronnie, confirmed that yes she is indeed a Jew, and we set an appointment to do an interview. 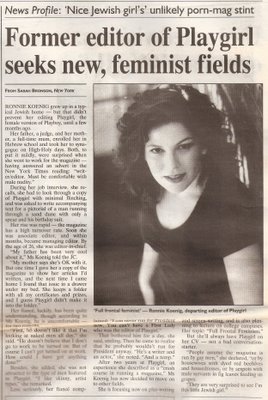 There she is. The text is hard to read, so here are highlights (as an extra prize you get text from the version I sent in to the paper, which was cut from the printed version):

Ronnie Koenig grew up in a stereotypical Jewish home - but that didn't prevent her editing Playgirl, the female version of Playboy, until a few months ago.

Her father, a judge, and her mother, a full-time mum, enrolled her in Hebrew school and took her to synagogue on High Holy days. She had a bat mitvzvah and joined a Hillel while she was getting her Master of Fine Arts degree . . . [S] he went to work for the magazine having answered an advert in the New York Times reading: "writer/editor. Must be comfortable with male nudity."

During her job interview, she recalls, she had to look through a copy of Playgirl with minimal flinching, and was asked to write accompanying text for a pictorial of a man running through a sand dune with only a spear and his birthday suit.

Her rise was rapid -- the magazine has a high turnover rate. . . . by the age of 26, she was editor-in-chief.
“My father has been very cool about it,” Ms Koenig told the JC.

“My mother says she’s OK with it. But one time I gave her a copy of the magazine to show her articles I’d written, and the next time I came home I found that issue in a drawer under my bed. She keeps a folder with all my certificates and prizes, and I guess Playgirl didn’t make it into the folder.”

Her fiancee, luckily, has been quite understanding, though according to Ms Koenig, he is uncomfortable -- for two reasons.

“First, he doesn’t like that I’m looking at naked men all day,” she said. “He doesn’t believe that I don’t go to work to be turned on. But of course I can’t get turned on at work. How could I have gotten anything done?”

Besides, she added, she was not attracted to the type of men featured in Playgirl. “I like skinny artist types,” she remarked.

Less seriously, her fiance complained: "I can never run for President now. You can't have a First Lady who was the editor of Playgirl."

That bothered him for a day, she said, smiling. Then he came to realise that he probably wouldn't run for President anyway. "He's a writer and an actor," she noted. . . .

After two years at Playgirl, an experience she described as a “crash course in running a magazine,” Koenig is focusing now on playwriting and screenwriting. . . .

But she’ll always have Playgirl on her resume. It’s a great conversation-starter. “People assume the magazine is run by gay men,” she said, “or by housewives with dyed red beehives and housedresses, or by sexpots with male servants in fig leaves feeding us grapes. They are very surprised to see I’m this little Jewish girl.”

Well. That was, um, nice, eh? I really enjoyed meeting Ronnie. I think in general I enjoy meeting women who are intelligent and fun . . . and, yet, so not like me. It's like entering another universe where things are upside down, and a witty, sophisticated graduate of Barnard College can spend all her time editing photos of men without their shirts . . . or their pants . . . except . . . this is not science fiction. It's real.

A few months later I got together with her again. The Barnard archives had given away some very old yearbooks, which I'd nabbed, and Ronnie came over to drink coffee and look at pictures from the 1920's and 30's. She told me that she was in the process of writing a one-woman show about her experiences as a pornography editor.

Jump ahead half a decade. I recently received this in my email:

Join us this January at The Kraine Theater for the world premiere of a play that dares to ask the age-old question:
How does a nice Jewish girl from Long Island
navigate her way through a world of oily, naked men
in an outfit that's dry clean only?!
Based on the real-life experiences of playwright Ronnie Koenig (who was the editor of Playgirl magazine from 2000-2002), Dirty Girl is a multimedia extravaganza featuring Koenig as Dori Richter, a girl whose life is forever changed when she answers an ad in the newspaper for a “writer/editor" who “must be comfortable with male nudity."
A cast of talented young actors take on multiple roles to accompany Dori on a wild, comedic ride, from the offices of the fictional Loverboy magazine to steamy photo shoot locales, in her quest to find a woman who actually likes the beefcakes in the magazine.
Featuring Corrie Beula, Bridget Harvey*, Ronnie Koenig,
Michael Littner & Jesse Teeters
(*appears courtesy of Actors Equity Association)
Directed by Robert W. McMaster
Costumes by Krista Thomas
Design by Edward Hodge
The Kraine Theater
85 East 4th Street, NYC
January 4 - 6, 11 - 13, 18 - 20, 25 - 27 at 8:00 PM
Tickets $18
For more information visit firecrackerproductions.org or horsetrade.info
Purchase tickets through SmartTix at 212.868.4444 or SmartTix.com
Sponsored by Secrets in Lace

What can I say? I don't exactly want to encourage my friends to see the show, though Ronnie assures me there is no nudity in it, male or female. (I did not ask how close to nudity they get, though.) On the other hand, I like Ronnie a lot, and I'm proud to have a casual acqaintance who is coming out with her own show. And, it sounds like it will be really funny.