Believe it or not, I've been using a film camera. Me, a professional journalist. To be fair to myself, my clients generally hire me to research a topic and write about it, not to take photos of it. However, most of my clients also cannot usually afford to hire a separate photographer, so I usually offer to take photos as a value-added service. For someone who only took one photojournalism course in grad school and doesn't remember the difference between an ISO and an SLR (though I did know, once), I take pretty good photos. I do things like pay attention to the lighting and framing, and I know how to use the various auto-settings like "portrait" and "sports" on my camera (and have a general idea of what the different settings do, at least sort of). Many, many of my pictures have been published. I'm willing to get down on the floor or climb up on furniture or into trees to get a good picture. And ever since 2001, when I took that photojournalism course, my beloved Minolta Maxxum STsi with its snazzy (to me) 28-80 mm zoom lens served me extremely well. The lens made it look like I was a real photographer, and the camera really did take gorgeous pictures.

Or it did, until a few months ago, when I noticed that it was blurring photos somewhat, rewinding film after about 7 shots, and messing up the light balance. Plus, in the last couple of years my clout as a photographer, such as it was, diminished significantly when people realized I was using film instead of digital. Until the camera started to die, my answer was that this Minolta took such good photos, that to replace it with a digital of similar quality would cost too much (which was true). And then, the unthinkable happened. I sent about 10 pictures in to an editor, and she wrote back that she couldn't use any of them because they "weren't good enough." That had NEVER happened to me before. I was so embarrassed. The time had come (and gone) to graduate to a new camera.

So, behold, my new Panasonic Lumix DMC-FZ7, which I just ordered and should have in my shutter-happy little hands next week: 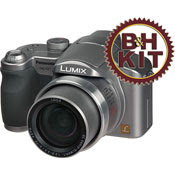 After doing some research yesterday, I was going to get the Lumix DMC-TZ1, but the nice salesman at B+H told me that the FZ7 model is exactly the same but has the 12x zoom (instead of "just" 10X, which is already incredible for a digital camera of this size), plus it has a pop-up flash, which means that there is less red-eye (so he says) with the FZ7 (not sure why that would be, but OK. B+H has never steered me wrong in the past). Assuming it's true, I'm glad, because in reviews I'd read about the TZ1, the only real flaw I could see was that the red-eye function doesn't work well. And do you know, this thing has 16 (count 'em, 16) auto-settings, including "night sky" and "baby" (automatically puts the child's age onto the picture, according to a birthday you program into it). I am going to have so much fun.

Woo hoo! No more trips to the camera store just to have film developed onto a CD! My only-somewhat-deserved clout is back! 12X zoom lens!!!! Woo hoo!

Email ThisBlogThis!Share to TwitterShare to FacebookShare to Pinterest
Labels: fun stuff, My Journalism