'course, there's always the bad stuff in the news. Government corruption, pollution, Hamas, poverty, blah blah blah. I'm doing everything I can to counteract the bad -- did you know that Tafkid, the organization that is supporting UYO here until we get onto our own feet, is also raising money to help those in need not be in need anymore? And that we've got all sorts of fabulous community-based initiatives going on? -- so I don't feel as awful when I read the news anymore. It's amazing how much better taking action can feel than doing nothing.

And now for some random thoughts:

* A few weeks ago I was at a Shabbat meal, and one of the other guests, a secular Israeli who turned out to be a card-carrying member of Machsom Watch, turned the conversation to politics, putting me in the unusual position of having to make excuses for the right, instead of the left, as I usually do. Such is the life of one who calls herself politically "middle of the road" or "confused": Whereever I go, I run contrary to those around me. I guess my role in life is to broaden everyone's horizons. Be that as it may, as a religious Jew, I'm generally surrounded by other religious Jews, who tend overwhelmingly to be politically right-wing. So imagine my surprise when I discovered that my host, a beard-clad, very religiously observant man, is himself a card-carrying member of Netivot Shalom! Oh my gosh! A left-wing, Orthodox Jew! That makes, like, four!

* I'm on a quest to find a venue for the next UYO, and therefore am busy making phone calls, comparing prices, and making visits to various hotels, inns, community centers, and retreat locations. I prefer to have the events in Jerusalem itself, but finding a place that has the kind of space we need, on the days we need it, at a price we can afford is proving rather difficult. Anyway, yesterday I saw a gorgeous new place, still under construction, near Bet Shemesh. It's comprised of what will soon be a large room (seats 100 people at round tables) with a beautiful view, several sleeping suites, a swimming pool, and gorgeous gardens with spaces for outdoor classes. Anyone who is planning a retreat or course of some kind is welcome to contact me for the information. The owners told me that the large room will be ready for use by May, and the sleeping suites soon thereafter.

* Those of you who read The Jewish Week are in for not one, not two, but three of my pieces in this week's Catered Events supplement: one on wedding segulot, one about new trends in Henna parties in Israel, and one on this wedding-dress designer, who grew up in Hillside, NJ. I just love the gold dress.

I "found" the latter two stories at the "Rain of Events" trade show at the Jerusalem International Conference Center (Binyanei HaUma) a few weeks ago. Knowing that the Jewish Week would soon be covering Catered Events, I hopped over there to scout for scoops. Though ultimately resulting in two stories, this trip was a serious mistake for a single woman in her 30's. For 2 hours I was surrounded by flowing chocolate fondue fountains, crystal glasses and chandeliers, videos of weddings, and stick-thin models in white silk and taffeta gowns (mostly with translucent midriffs). And, everywhere, vendors asking me "are you the bride?" "are you the bride?" "are you the f*ing bride?"

And then, a representative (who I later found out is 17 years old) of evening-gown designer Tushinka, asked me "are you the mother of the bride or of the groom?"

(FYI, I complained to Tushinka -- yes, I did -- and the designer herself apologized and told me that the girl was supposed to ask "are you the sister or mother of the bride?" Apparently, they missed the part in my complaint letter in which I suggested that a woman of any age could be the bride, and that letting the word "mother" pass through one's lips at a trade show for wedding vendors is really not a good idea. Despite the designer's invitation to me to come in to their studio so they could make me "feel like a princess," I do not think I will ever, ever patronize their business.)

However, speaking of wedding dress designers, I've discussed before the fact that it is trendy among Israeli brides to wear dresses so revealing and so glitzy, they could easily fit in among women of direpute on Seventh Avenue. The "in thing" for Israeli brides are dresses that look like lacy bikinis and matching low-rise skirts, with a piece of gauze attaching them to each other. But - but! - at Rain of Events I discovered this fabulous designer, Aviv, whose dresses were simple, elegant, and truly breathtaking. He was also very polite, and said that about 1/3 of his clients are religious women, and that he adds sleeves and such for them. So, if you are getting married in Israel, skip this: 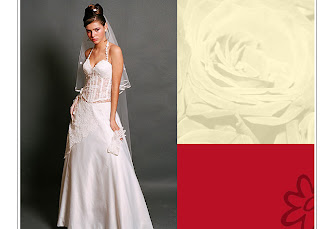 (from Hana Dai's "classic" collection, believe it or not) 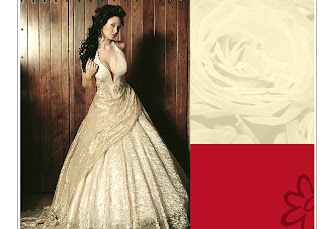 And instead, go for this: 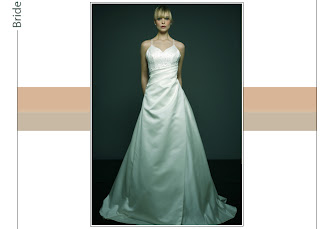 * My sister tells me that Border's books has a promotion going on, in which people who come in to pre-order the 7th Harry Potter book can go home with a bumper sticker with either the words "Trust Snape" or "Snape is a very bad man." The cashier told my sister that a majority of buyers are choosing to "Trust Snape." Frankly, I don't see how anyone could NOT trust Snape.


It is so obvious that Dumbledore asked Snape to kill him under certain circumstances, and that when Dumbeldore was saying "Severus, please," what he meant was "please kill me so that it is you who has done it, and then Voldie will trust you completely, and you'll be able to spy for us better." I mean, come on, didn't anyone else catch that when Snape kills Dumbledore, he has a look of "hatred and revulsion," the same words Harry uses to describe his feelings about himself when he is force-feeding Dumbledore the potion in the cave, at Dumbledore's orders?

Sure, Snape is a complicated and not exactly endearing character, but I'd bet my British copies of books 1-4 that Dumbledore trusted him for a much better reason than Snape just saying he was sorry. Probably, Snape had been in love with Lilly, and turned to the good side after Voldie killed her, the only person who had ever been civil to Severus. That's my theory, anyway.
Posted by Sarah at 2:39 PM