Moscow (Part XI - The Way to the Bolshoi)

I was about 15 minutes late meeting Rusina, so when at first I couldn't find her, I feared that she'd given up and left. But she was there, with a hug and a smile and an expression of sympathy. She not only loaned me some money, she also came down into the metro station with me to buy me a 20-ride ticket, and showed me on the subway map how to get to the Bolshoi.

The great thing about having lived in for so many years is that if you have mastered the subway, any other city's system is pretty much a snap. It was easy to work out on the map which lines I should take and where to change trains, and it was easy to match the signs in the stations and on the platforms to the information I'd gleaned from the map.

I should add here that 's reputation for having excellent subway service is well-deserved. The stations are clean, nicely decorated, and well-marked, and the trains came by approximately every three minutes. (Some of the stations are so beautifully decorated that they were listed in "Moscow Top 10" as tourist attractions in themselves. Alas, since my logistical troubles and illness forced me to shorten my itinerary, I wasn't able to see any of them. I'd been hoping to.)

It also offered an incredibly smooth ride; I was annoyed at first to find there weren't poles in the subway cars for short people to hang onto, and then found that the level of "jerking" was small enough that with just a little concentration I could avoid losing my balance, even when the train was entering or leaving a station.

Still, despite my subway savvy, the routes and stations were unfamiliar to me, and so I did a lot of double-checking of signs and maps to make sure I was always going in the right direction. This added time to the trip.

Adding insult to injury, the balls of my feet were starting to hurt like hell. For two days I'd been wearing the same pair of boots (I hadn't packed any other footwear, because why should I? It would be too cold in to wear flats), and they were getting incredibly uncomfortable.  So now, each step was an effort because I had no energy AND because my feet felt like they were burning off from the inside. I was therefore disappointed to find that each subway platform had only one map to look at, usually at the other end of the platform from wherever I was! Torture.

Anyway, when I got to the Teatralnaya station, it was . The ballet started at 7. With any luck I'd make it just on time!

I emerged from the subway system into the night air, and saw this (I lifted this photo through Google Images from  a blog called Internet Dating UK but it's exactly what I saw), and knew without needing to be told that this was the famous Bolshoi, just steps away! 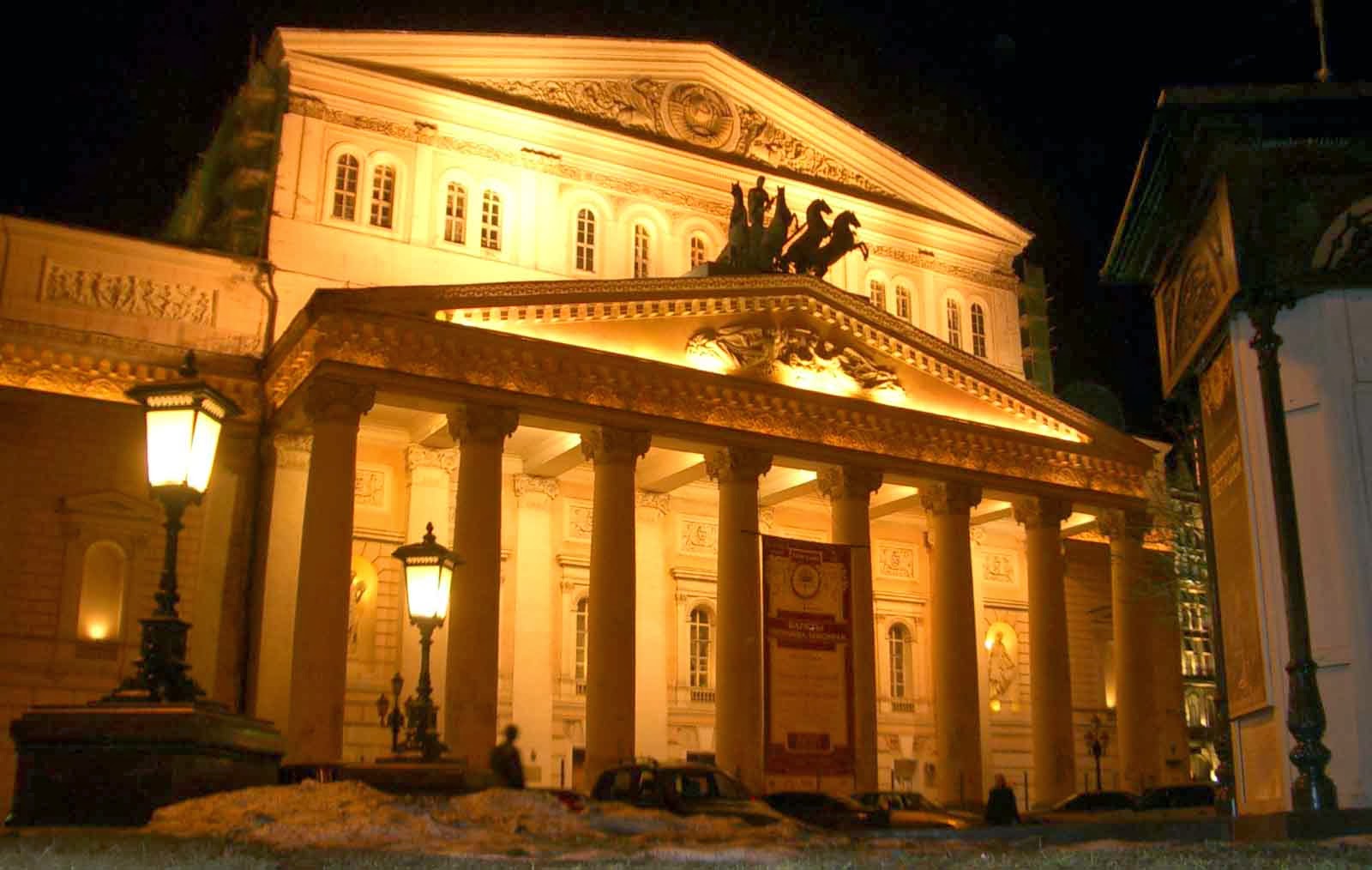 For a minute I just stared at it, but time was a-wasting. I approached the entrance at the columns, but saw people in front of me being turned by a guard to a place around the corner. I knew there was only one show at the Bolshoi that night, in the "New Hall," so I motioned to the guard "Here? There?" and he motioned that I should go around to the left side of the building and then straight.

The current Bolshoi Theater building was built in 1821. A little more than a decade ago, it was closed for extensive renovations. In order to be able to continue performances while the building was being fixed up, the Bolshoi  built the "New Stage." I'd seen in pictures beforehand, and knew that even though I wouldn't be in the historic auditorium, I was in for a treat. The Bolshoi had invested a tremendous amount into making the New Hall nearly grand as the old, and the pictures looked just beautiful.

I went around what was clearly the historic, "old" building, looking for an indication of where the "new" hall was. I walked all the way down the length of the Bolshoi and didn't see anything to indicate where I should go. So I walked around the back. Nothing. And around the other side. No entrance.

Now I was back at the columns where the guard had directed me away. I had just wasted so very many precious steps on my aching feet to walk completely around the Bolshoi building.

Exasperated, and noting that it was now after 7, I went through the main entrance and found a human being at a sales booth. I showed her the confirmation for my ticket to the night's performance, and she issued me a ticket with a beautiful design on one side and the Bolshoi logo. There it was, written plainly in black and white: Row 10, Seat 13. My perfect seat in the center aisle!

She pointed me back outside and insisted I should go out the way I'd been before, around to the left. Stymied, I went out again, and this time found a group of about eight other people who all were clearly looking for the same thing I was. Finally, we realized that the grand building on a platform to our left must be New Hall. You didn't RE think it would say "Bolshoi" on the building anywhere, even in Cyrillic, did you?

We all went in, checked our coats, and then had more trouble figuring out where to go from there. Up some stairs . . . then up more stairs . . . where an usher (who spoke hardly an English, natch) told the group they have to go up yet ANOTHER flight of stairs. I approached the usher and presented my ticket, and she said "Come this way." She led me silently into the theater . . . onto the first balcony . . . where she unfolded a seat connected to a pillar, and pointed that I should sit there.

It was and I'd lost my beautiful seat, until intermission. I felt like crap, and the anxiety of the past few hours still hung on me like a cobweb. But I was at the Bolshoi, and a very graceful dancer was moving onstage, and there was music playing. I reminded myself that everything I was experiencing was very much a First World Problem. Poor me, I have a bad seat at the Bolshoi Ballet, boo hoo, you know?

Deep breaths, Sarah. Calm down, focus on the present, and enjoy the Bolshoi.
Posted by Sarah at 10:30 PM