And now for something a little different

This war is making me ill.

The rockets on Israeli schools, hosptials and apartment buildings makes me ill.

The media not giving people the context they need to understand why so many Lebanese are dying (hello, Hezballah is attacking Israel from within suburbs!) and so few Israelis (hello, Israel invested millions of dollars into early-warning systems, and bomb shelters, and the North has emptied out, creating hundreds of thousands of Israeli Internally Displaced Persons) is making me ill.

The people who do not understand that, from Israel's perspective, this is NOT an Israel-Lebanon war, but rather an Israel-Hezballah war, make me ill.

The fact that it is Israeli weapons that have killed so many innocent people -- even though we have no choice -- makes me ill. The fact that there are some Israelis -- including, apparently, some army spokespeople-- who don't understand that just because you warn people to leave an area, doesn't mean they all can, makes me ill.

The people in the West who do not understand that if Israel does not decisively castrate Hezballah, the entire Western world will be experiencing terrorist attacks for a long, long time, makes me ill. If you are sitting in Paris or Madrid or Berkley, and you think that Israel should just cut their losses and quit now because the war is taking too long and too many Lebanese civilians are suffering, I have news for you: Hezballah is not fighting against Israel. Hezballah wants to take down the entire non-Muslim-- that is, the Western-- world. Israel is fighting this war not just for our own sakes, but also for yours. If Israel does not cut down Hezballah like crushed watermelons now, then for the next many, many years, a lot of Islamist terrorists are going to be copying Hezballah's MO right in your neighborhood. And then, in order for any government, anywhere, to take down the bad guys, the civilians they'll unavoidably hit might be you. Since you don't want to help us win this war, understandably, because that would cause World War III, you have a choice: Either shut up and let Israel do what it needs to do, or get ready for the missile launchers to arrive in the park across your street, and the terrorist cells to move in to the apartment upstairs.

Hezballah are like bacteria. When you take antibiotics, you have to take it for the whole course. You have to wipe out all traces of the germs. If you stop taking the antibiotic before it has finished doing its job, you are creating a greater likelihood that the bacteria will come back -- and stronger next time.

The fact that I'm going North tomorrow . . . making me ill.

I am a bundle of nerves. I am having a nervous breakdown. I am sick, sick, sick of reading, writing, and thinking about this war.

So you know what we're gonna do instead? 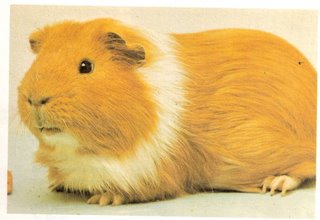 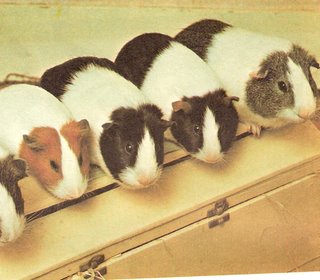 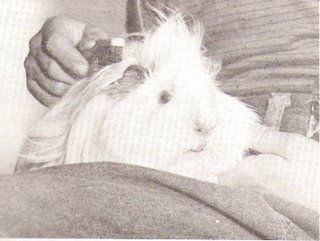 This little boy from the 1970's is brushing his guinea pig's hair with a toothbrush. 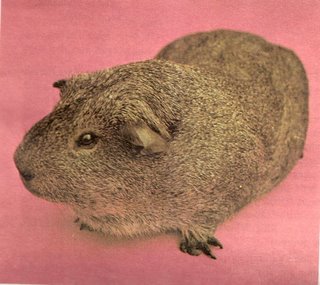 I had two pet guinea pigs. I bet Nasrallah's parents never let him have one. 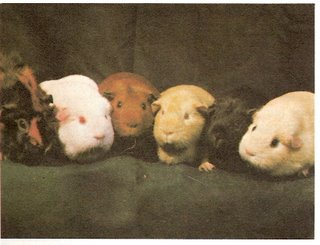