After spending 4 years developing a relationship with my haredi (ultra-Orthodox) relatives in the "Bais Yisroel" neighborhood of Jerusalem, I took the opportunity, since my roommate is away and allowing me to use her room for guests, to invite two of the children over for a sleepover.

I'm not sure why I did it. I guess part of it is, frankly, that I'd love to get those kids slightly out of what we call their "daled amot" -- the small piece of the world that is familiar to them. And partly it was because it gets uncomfortable, and boring, always being the one to join them in their world, and every so often I'd like them to come join mine. I was pleasantly surprised when the parents -- he learns full time at the Mir, she's a full time mom to ten children -- agreed to come to my housewarming party a couple of months ago. They were extremely out of their element, but they came, and they were gracious. So I was only almost as surprised when they agreed to let Batsheva, 12, and Rochela, 8, sleep over.

I'd made it clear that I don't expect them to eat my food. I've been on the other end of that. When I visit my secular relatives, I deeply appreciate the fact that they assume we'll eat out together, and they don't make an issue of the fact that I won't eat anything cooked in their dishes, since they don't keep kosher. I like them a lot, and am glad that, on the surface at least, they don't take it personally.

So I'm trying not to take it personally that my kitchen is not kosher enough to feed these girls from. I treated the situation exactly the way I'd want a secular person to treat me: asking detailed questions about what's OK and what's not, accepting that it's just easier for them to bring their own food than to worry about what's in mine, and enjoying their company without letting kashrut issues get in the way. I have to admit, though, that sometimes I really just want to roll my eyes. If the badatz chatam sofer hashgacha is "well, I guess it's OK. It's just orange juice, right? That should be OK, I guess," then we are dealing with a world of kashrut totally out of my league. But again, I'm trying to remember that this is just as uncomfortable for them as it is for me when I'm in their place. They are probably as deeply concerned about not being rude as I am when I'm in their shoes.

The more practical issue was what to do to keep these girls entertained. It took me a week to hit on activities that a) can be finished with quickly on Friday morning so I can get other stuff done, b) don't cost a fortune, c) will be acceptable to their parents, c) won't be deathly boring for me, and d) aren't the same things they do all the time.

The kotel was out because they live closer to it than I do and go all the time. I thought about asking if the Israel Museum kids' section or the Science Museum would be alright, but it's pricey AND time consuming. Movies are absolutely, positively not an option; I didn't even ask. I did ask if I could give them manicures and the answer was no.

In the end, here's what we're doing: they showed up today at around 5:30. I think this is the first time they've ever been in this part of Jerusalem at all; when I tried explaining once where I live, the parents were like "anything south of King David street, we don't know from." I was impressed that the girls were OK taking the bus by themselves, when they'd never been in these parts before. They just took careful notes from me about where to get off, and they did it all on their own.

Anyhow, after they got settled we painted some crafts projects. They are very sweet girls and really got "into" it. Then we went to the local playground and ate a picnic dinner, and they played on the apparatus -- where they were surrounded by secular and dati leumi kids. They cooed over an adorable little Ethiopian baby, and we had an opportunity to talk briefly about the issue of dogs, and why they don't like them (charedim here in general are petrified of dogs).

Then we came back to my place, and glued all sorts of chotchkes onto our crafts projects. Here's a picture of them drying. Aren't they beautiful? We really had a great time and made a huge, funtastic mess! 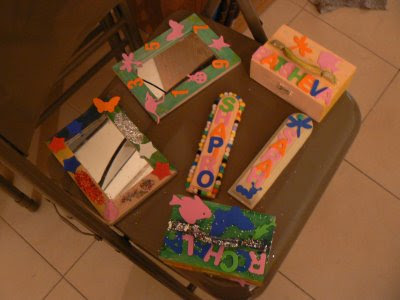 Next up was playing with my computer, which fascinates them. But what could I show them that would be acceptable? I pushed the envelope by asking if they'd watch women's gymnastics (olympics/ on YouTube) and they said no, it's not OK. So we watched YouTube videos of my nephews doing various hysterical things, and then I Google-searched "Torah games" and we did a few online parsha quizzes.

They are now in bed, after having ascertained by calling their mom that it was OK to use my Colgate toothpaste. They are talking quietly and reading my copies of the Hebrew versions of "Winnie the Pooh" and "Charlie and the Chocolate Factory," which may or may not be OK, but at this point I'm not calling their mom to ask if oompa-loompas are treif. I have the feeling that the girls themselves would put the books away if they found anything they knew to be "problematic."

Anyhow, so far they've been truly sweet, well-behaved, and affectionate, hugging me over and over and telling me that it's so fun to come visit me, so I'm glad.

Tomorrow the plan is to make home-made playdough, and then I put them back on the bus to go home.

So far I'm not regretting this sleepover idea.
Posted by Sarah at 10:50 PM