Am I Missing Something?

So, there is this very popular (notorious?), very controversial, very left-wing blogger named Daniel Sieradski, aka the Orthodox Anarchist. The title of his blog says a lot about the many layers on which this guy functions. I've met him once for a story I was writing, and he struck me as a really nice guy. Do I agree with his politics? Hell, no. But the guy cares a lot about Jews and Judaism, and even when I think he's waaaaaay misguided, I know that his intentions are good and that he feels a very strong connection with the Jewish community. He's got a good soul, that Dan. He's crazy, but he's got a good heart. I don't mean that condescendingly. I just mean it. And, some of the stuff he does is really very productive and important.

Anyway, about a week ago, Dan posted on his blog that he is organizing this event, which got some local press here in Israel: 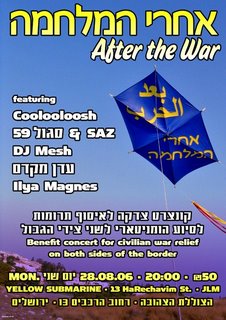 In case you can't read the print, it is a "Benefit concert for civilian war relief on both sides of the border." Happening tonight in Jerusalem.

At this point, I can see reasonable people having a range of reactions. My personal reaction was "isn't that nice? If I'm not busy, maybe I'll go."

I can also see reasonable people saying "it's nice, but I'd prefer to give 100 percent of my charity money to organizations that will help my own people. Family comes first."

I can also see reasonable people saying "Before I make any judgement about this event, I want more information about exactly which organizations will get the money, and howDan is ensuring that the money will be used only for food, medicine, and other humanitarian needs, and won't end up in the hands of people who seek to destroy Israel."

And finally, I can see reasonable but very grumpy people saying "why the hell does he care about Lebanese civilians? Damn lefties," and then turning the page of their newspaper and rolling their eyes whenever they hear about this concert, but not giving it much more thought.

But what I do not understand, what I think is completely unreasonable -- unless I'm really missing something here -- is why anyone would be so against the idea of humanitarian aid to Lebanese civilians that they tear down the posters, write egregiously nasty emails to Dan, suggest that they want to beat him up, and otherwise make his life miserable.

It's one thing to say "our own come first" or "stupid Lefties" and then go on with one's day. But to write a nasty, threatening email to Dan, or to tear down the poster, is to go out of one's way to express anger that anyone is considering Lebanese feelings at all.

I don't understand this. Is there something about the concert I'm missing? Or are people -- mostly Orthodox people, according to Dan, and much to my chagrin -- so appalled by the idea of anyone helping Lebanese civilians in any way -- at the same time that they are raising money for Israelis -- that they will actually spend time and energy trying to make the concert not happen?

But actively trying to stop the Lebanese civilians from getting aid? Even though it means preventing aid to Israelis as well? Going out of one's way to undermine an event whose aims, in addition to preventing Hezballah from having a monopoly on reconstruction efforts, presumably include working toward peace . . . even if you think it won't work, or that it's not important, why try to stop it? Why get angry that it is happening?

If you think the idea of this concert is stupid and a waste of time, then don't go. That's it. Why bother going out of your way to get nasty about it?

Please tell me I'm missing something.
Posted by Sarah at 12:55 PM